skip to main | skip to sidebar

HARD Summer Broken Up before Midnight

I heard at these 'rave' things, chicks get naked!- Murs 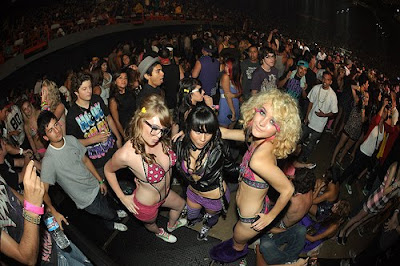 Well I heard at these 'rave' things, crowd-control happens. 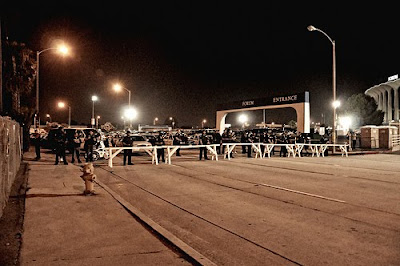 I feel SUPER lucky that I didn't drop a Benjamin on HARD Summer. Rather than going to this poorly-planned rave-turned-riot, I had an epic night with my best friends in Hermosa Beach. Here's are some videos of some tripped-out kids talking shit about the promoters of the event and their poor planning, the riot police pushing a crowd out of THE MOTHER FUCKING FORUM in LA, and kids jumping off of the upper decks of the stadium. These are some HARD times for LA raves, hopefully HARD Halloween has some better planning.

Sources: TheFmly, The Scenestar
Posted by Rather Red at 11.8.09 No comments:

In confiding in our randomness theme today (one ehteral Coldplay track, one crunk-rock pop-and-lock FF5 track) I bring you two extremely different covers of the Postal Service's "Such Great Heights." Take it away A.V. Club:

"It's a band called Confide. They're covering The Postal Service's gentle electro-ballad "Such Great Heights." I guess it's a testament to the song that it "works" both in this incarnation and the way that Iron & Wine did it a while back. Check 'em both out. If you play both videos at once, Satan will tell you to kill something."

Upon my first few listens of Coldplay's latest effort, the most "experimental" track out of the bunch was "Strawberry Swing" towards the end of the great fourth effort from the Brits. It bounced and rolled with Afro-pop guitars, falsetto vocals, percussion faded in-and-out and perfectly complimented the dream landscape vocalist Chris Martin painted.

I always took the track literally, always painting the "sitting underneath the oak tree, possibly on a swing in the English countryside" loll that the Afro-pop guitars and swirling violons put you into. But what Coldplay (and the directive team behind the video) has done to in the mere context of words I cannot find --reimagine-- this song is one of the most beautiful, imaginative and heartfelt videos of our generation. We are swept into a childlike, playground/street fantasy that who knows, maybe Martin's child Apple came up with. This video not only changes your opinion/form on the song, but I think personally challenges myself to try and be as creative in my lifetime.

Think Up!, and remember, don't look down, because you're already there.

(Ed. note: This version is pirated, I know that sexpot Katy Perry is trailing behind the end of Strawberry Swing for some unknown reason (but I mean, who wouldn't want Perry trailing you right?). The video just came out today and LOP wanted to get it to you ASAP. I will update and embed a better version as soon it Coldplay puts it up on their channel in HD. Family Force 5's Dance or Die video should be coming around soon as well.)
Posted by D-Rock at 20.7.09 No comments:

Labels: hopeful, New Music, rock, Too Much of a Good Thing, Videos

Brand New's forthcoming album, Daisy, has been set to be release September 22 (an avid fan might use some vulgarity to explain their feelings of the continued postponement of the album). But this antsy fan can rest assure that the next album will be just as different as The Devil and God are Raging Inside Me. Jesse Lacey's comments on the new album alludes to the fact that this could be the band's last chapter in their musical odyssey. Let it be clear that the new tracks are meant to be experienced, meaning get your ass to a concert even if you don't have a job, rather than a merely repeated LP in the whip. Here is one of the songs off the new album at their July 11 show in Brooklyn. The song is more than mellow and the crowd reflects this mood, but at a Brand New concert most of the audience is swaying to simple tones that barely slide past the THC bouncers anyway.*


This is a much better video of another new track, Gasoline.

*See my pictures from the concert in Amsterdam
Posted by ImSecondsAway at 14.7.09 No comments:

Kings of Leon- In Memorium? 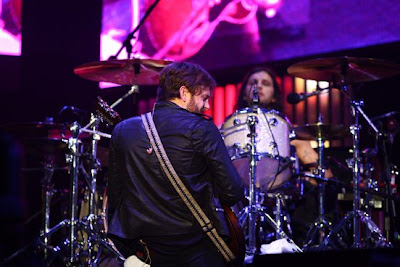 Since the most recent news out of the good ol' countries of Scotland/Ireland suggest that Kings of Leon are either A)Breaking up, B)on the verge of a epic internal collapse that could lead to collapse or C)Just having one of their famous 48-hour drunken rages that leads to brotherly fighting-- I present to you two rare tracks from their earlier (and still drunken brawling) happier times, Youth and Young Manhood.
Talihina Sky (rare B-side)

1. Coldplay has always been a victim of its worldwide mega-stardom and commercial success, one of the last real super bands to be tied down by a record company these days, and sometimes it hinders their artistic creativity. You know these guys are good, they sometimes just don't want to be better.

2. Having gone to a Coldplay show live (I was with a chick mind you!), they used to stick to their rock star formula-schtick, but ever since the experimental and needed change-of-pace Viva La Vida (Or Death and All His Friends) they have decided, "People are going to see us regardless, and they have probably already seen us perform, so lets change it up." And they have on their most recent world tour. Sure, yellow balloons fall from the sky during "Yellow," and the swinging light flies around during "Fix You," but filtered into their newest set is a more intimate experience with the fans.

3. During their last world tour, the encore was a stripped down, acoustic set allowed for a clap-along, jammed out ending with Kingdom Come, and has progressed into a middle-of-the-set walkout into the crowd jam session. One improvised song (in our case, "Billie Jean" from a few days ago," and one mash-up of crowd (and personal) favorite "God Put a Smile on Your Face" and "Talk." It allows the usually by-the-basics band to return to their more acoustic routes, and connect more with the ever-distancing audience in an arena tour.

4. Their "Billie Jean" cover is a great of improvised jamming, strumming, and overall you can tell the band in having a good time paying tribute to the King of Pop. The song lags a a tad bit (as given by parched audience participation) , but the duel guitars of Johnny Buckley and drummer Will Champion provide plenty of Quincey Jones' trademark funk on the track, while Chris Martin rides the falsetto rollercoaster in-and-out of the song. How long will it stay on the arsenal? Probably not long, but a fun change-up to throw at the giant crowds nonetheless.

5. The tour-long staple of the mash-up is a great little thing of brilliance however. When a band this large has released so many popular songs, how do you please the fans who come to see the ONE song that touched them more than any other? Mash-ups of course! Usually reserved for a Daft Punk of Justice concert, Champion uses an electronic drum pad to put up the tempo, and bassists Guy Berreyman and Buckley are hooked up wireless-amps to all jam around Martin's piano and produce both songs in back-to-back succession to perfection. It may not be the way the crowd wants to hear both songs, but I guarantee those people at "The George," I'd imagine that would be some silly arena in the middle-of-nowhere in the Dakota's, will be left with a different interpretation of the band's songs on that little perch. Those outfits they've been wearing for 1.5+ years gotta be stank by now though.

Yes, ok, I have a summer crush, but its warranted! Everyone else does as well. If you want to get cerebal and pretend you were whisked away to those GATE (Gifted and Talented Education) classes when you were in elementary school, try and figure out this coding offered to the single of the year so far, Phoenix's 1901. 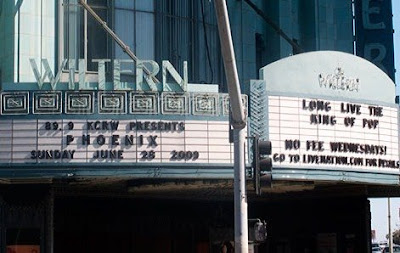 Driving down through Koreatown and into West LA, I noticed that Phoenix's upcoming (and now past) concert was placed right alongside a fitting tribute to "The King of Pop," Mr. Michael Jackson.

I think it is also fitting that as we will continue to have Mr. Jackson's legacy (good and bad) and his family's future legal troubles thrown upon us all summer long, I give you my media-attention whore at the moment, those French dudes from Phoenix. (I also found it fitting that they gave a tribute to the man at a recent concert in Denver, staying afterwards and throwing a huge "Thriller" album dance party, posted last.)

Phoenix is destined be the next "French fry" if you will from France. Their latest, "Wolfgang Amadeus Phoenix," is by far their best, tightest and most productive/rewarding album to date, but I highly recommend you go back in their catalog to see how their friendships with both Daft Punk and Air (grew up in the same neighborhood) has heavily influenced the AM-radio/early 70's radio on the French quartet. (I'm 3-for-3 in turning my friends on to them.)

So as the summer hits its stride (and halfway point), the heat becomes sweltering and swampy-assed, remember that at the end of the day you can grab a cold one, throw a party, and have Phoenix as the background noise.

Enjoy some recent killer live performances and get litzomanic.

Labels: New Music, rock, Too Much of a Good Thing, Videos

Dirty Projectors- Stillness Is The Move


This fresh sextet hales from the streets of Brooklyn and are creating much steam on as the opening act for TV on the Radio's tour. Headed by Yale graduate, David Longstreth, This band bends the sounds of West-African guitar lines and the synth provides hollow beats to the angelic clamoring and high-pitched, euphoric sounds from the girl members. Bitte Orca is the new album in stores now. "Stillness Is The Move" provides a clear and catchy understanding of this progressive sound.
Posted by ImSecondsAway at 9.7.09 No comments:

Not quite sure how I feel about this light-on-the-feet Brooklyn band yet or their single. Its a mix of everything a quintet can throw at the art-rock genre (glam rock, power-pop, experimental stuff) and they even sound larger than they actually are, it's quite ambitious stuff. It's very unsettling at times but the barouque pomp-and-circ. of the whole thing leads me to believe their album will be worth of few spins.
Amazing Baby - Headdress